Holy crap what a grueling day.  I set out around noon and headed to Cheeseburger to grab a light lunch before tackling the crater that I failed to get to on Sunday.  The hike costs a buck for entry and is about a 2 hour round trip.  The first part was paved so I thought it wasnt so bad, then it turned into a rocky path that was blown out of the crater which ran for several hundred feet.  At the end of the rocky path, I thought I had reached the end but after turning a corner, there was a staircase with about 50 steps which led to a lookout.  After taking a 5 minute break to cool down and to get the heart to slow down a bit, I continued on….  towards another staircase of 50 steps.  I thought I’d get it over with so I started to run up the stairs which was a mistake.  I was completely burned out at the top that I had to sit down.  After 10 minutes, I continued through what looks like an old army lookout and around the corner was another set of stairs, people coming down told me that this was the last bit and I’d be at the top.  After going up the spiral staircase, I was there and what a view.  I was at the top of Oahu, I could take pictures of everything.  The walk down wasn’t as bad and took less than half the time but it was hard on the thighs, why couldn’t they have a tram that comes down like at Grouse?  I’m surprised that I made it and I’m glad I did.

So today, I woke up a bit late…  it’s strange how people wake up so early here and the town is practically dead by 8pm.  I got up at 2pm today hoping to make it out to Diamond Head crater but after going to two wrong bus stops I finally made it.  Unfortunately it was too late to get up the crater, they don’t allow people up past 4:30 so I had to turn back and go back to the hotel.  The blister is holding out okay for now.  Tomorrow…. off to the aquarium.  I’ll catch the crater another day when I go up for the tour.

I decided to go to the Honolulu Zoo today and I got a big blister on my heel because I decided to walk there.  I made a stop at Waikiki beach and take some pics.  First thing I noticed about Kalakaua Ave on my way to the zoo was how much it was like Vegas without the casinos.  I see expensive big name shops everywhere.  I dunno if that’s for me, I went to Hawaii for some tropical relaxation but I found that everything is easily ignored with the warm weather, palm trees and clear water.  The Zoo was rather interesting because I haven’t been to one since I was a child when the Stanley Park Zoo was still around.  Kinda sad since the Greater Vancouver Zoo is a 45 min drive away.  I didn’t get to see the Lion or the Cheetah because they were hiding in the shade but there were plenty of other animals that I haven’t seen before like the ostrich and the giraffe.  I have to say that the cutest thing I saw there was the klipspringer, it’s basically a cuter smaller mountain goat….  and the meerkats

Now… what to do about this blister…

Here’s a few pics I snapped while out on the first day.  I arrived later than I thought due to a delay in Vancouver.  Got on my plane and had to wait for almost an hour because they thought they’d be nice and deliver a part for a plane in Honolulu so I had to wait for the thing to clear customs.  I checked in at roughly midnight.  Walked out and grabbed a mahi mahi tuna sandwich and went to bed.

The time zone change was strange, I thought I had slept in pretty late but it was only 10am.  This being the first day of eight, I figure I’d just take it easy and get a feel for the place.  I went out for a few hours, walked to the Ala Moana Center to have a lunch of ice cold ramen.  It was pretty hot out there, roughly 25 degrees so I thought it was refreshing.  Afterward, I took a stroll to Waikiki beach for a bit and grabbed a 6 pack on the way back.  I got back to the hotel at 4pm because I figured they would show the Olympic opening ceremony live but no, it wasn’t on til about now… 8pm…  oh well 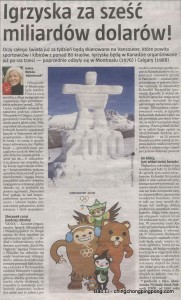 For those who frequent internet forums may be familiar with the Pedobear.  He was made popular on the 4chan forums where his image is used to call out potential pedophiles.  A Vancouver local has photoshopped his image in with the Olympic mascots and has made it’s rounds on the internet.  I guess the image was so popular that if you do a Google image search for “Olympic Mascots” it would show up a number of times in the first few pages.

A Polish newspaper must’ve done an image search and grabbed the image without knowing about the Pedobear or thought this one was better because there’s 5 mascots.