Back in September 2008, I had this huge craving for clam chowda.  Back in January, I went to Boston with my buddy Russell to catch the Spice Girls concert (Tickets were well over $2000 in Vancouver and Russell went to college in Boston so he knows the city well).  That’s when I had my first taste of New England clam chowda.  After having that, it made me wonder wtf I was eating all these years, it was NOTHING like the real thing.  I couldn’t have chowder anywhere else afterwards.

So the chowda craving kicked in and I was bugging people to go back to Boston with me.  My friend Colleen took the bait but on one condition.  We go to New York first for a few days and drive up to Boston.  Well, that was that and we were on our way.  I wish I hadn’t gone to New York because it’s ruined a lot of food for me.  Cheese cake and pastrami sandwiches just don’t taste the same anymore.  In fact, to get the taste of NY Cheesecake, I went to Morton’s of Chicago in Vancouver and bought a whole cake for $150 a year later (They flew them in fresh daily from NYC).

It’s been 3 years since I took this trip so my memory is quite blurred.  Let me know if some of my descriptions are wrong.  I also apologize for the quality of the photos, I took them with a Canon SD750 and it has horrible low light capabilities.  This was also before I figured out how to geotag my photos.  I didn’t learn how to do that until my trip to China in 2010.  Anyways, enjoy…

My $100 meal at Mccormick and Schmicks

Another shot of the Dakota 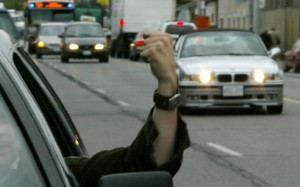