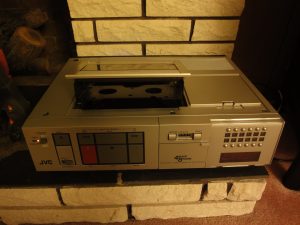 I’ve been using a PC as a media player with my TV for almost the past 7 years.  It started with the introduction of Windows XP Media Center, I tried it out and fell in love with it.  I setup a permanent computer dedicated to playing media from my server.  Over time, it’s evolved into my PVR as well.  Then came Vista Media Center and then Windows 7 Media Center.

As the software changed over time, so did the hardware.  It went from a Pentium 4 to a heat pumping Pentium D Dual core and finally to a Core2Duo which I’ve used for the past 2 years.  There was one thing that never changed and that was the case I was using.  I originally bought a Thermaltake Mozart HTPC case and stuck with it.  It was a decent looking case and HTPC cases all pretty much look the same so I opted for one of the cheaper ones.  Over the years, one one case really stuck out and that was the nMedia HTPC-8000.  It looked like an old vintage radio but I thought it may be too big for me.

The electronics recycling pile has some really interesting stuff at work and one day, I stumbled on a vintage top loading VCR in mint condition.  It was a JVC HR-7200U.  Vintage electronics collectors can stop reading now.

I took the VCR home thinking I can swap the components in my Thermaltake case but after quickly sizing it up, I realized it won’t fit in there.  The power supply wouldn’t fit and I can’t fit the motherboard in there without disabling the eject mechanism…..  I MUST keep the eject mechanism.  Another day, I lucked out and found a Dell Latitude E6420 that had been run over a few times because the user drove off with it still on his car.  Externally, it was scratched to shit but it functioned properly.  The laptop was the perfect computer to shove in the VCR.  It was compact, powerful and only needed 3 cables plugged in to work.  Power, LAN and HDMI.

After a day of gutting the VCR and hacking the internals with a Dremel, I finally completed it.  I originally soldered wires to the power LED and power button.  I had it all working but due to some carelessness, I tore the circuitry out by accident when I was reassembling the laptop.  Oh well… the power light you see now is powered by the USB port.  Would’ve been cool if I got the actual power LED working because it fades in and out when it’s in sleep mode.  The only thing missing now is a VFD display where the clock is.  I tried to move the Soundgraph iMon from my old setup in there but it doesn’t fit and it needed 12V power which I can’t get with a laptop.  If anyone knows of a VFD that’s powered by USB, please let me know.

Yes, I preserved the eject mechanism.

I switched from Windows Media Center over to XBMC.  I’ve found that while Media Center was great for it’s time, it has not evolved and improved over the years.  XBMC and Plex Media Center are leaps and bounds ahead of Media Center.  With XBMC and a few plugins, you can pretty much cut your cable bill.